The Taste Comes to Costa Mesa

The L.A. Times presents, on October 18th & 19th, The Taste Costa Mesa. Two days of delicious food, wine, spirits, and chef experiences at The MET in Costa Mesa. Each night, local restaurants will showcase the incredibly diverse culinary scene of Southern California with their unique creations, in addition to fun pop-ups and collaborations!

Friday, Oct. 18, 7 to 10 p.m.
Genevieve Ko, the Cooking Editor for the L.A. Times, will initiate the event with the introduction of Syrian pastry chef Maher Nakhal, of Le Mirage Pastry. He will begin by sharing his secrets behind the handcrafted mastery of his genuine Middle Eastern desserts and French pastries. Ross Pangilinan, the critically acclaimed chef of Terrace by Mix Mix, will demonstrate the creation of one of his signature dishes that showcases his diverse style of Euro-Filipino flavors, which is to be hosted by Times Features Writer Gustavo Arellano. Featured restaurants include: Filomena’s Italian Kitchen, Outpost Kitchen, Puesto, Tackle Box, The Ranch at Laguna Beach and WAVE Gourmet Burgers.

Sondra Barker
A purveyor of exceptional eats and escapes; on a journey to find the perfect bites in the most wonderful places.

wpDiscuz
0
0
Don't be shy. Leave a comment and tell us your thoughts!x

for exclusive giveaways to the most delicious restaurants, events, and attractions! 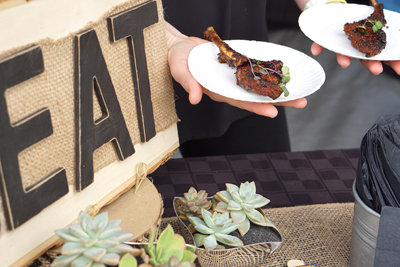 Welcome to our Inner Circle!